Life on the trails has inspired many American classics, from Colin Fletcher’s “The Complete Walker” to Bill Bryson’s “A Walk in the Woods.”

On Tuesday, Whitefield’s Andrea Lani officially made her own contribution to the legacy of literary alpine adventures.

Lani’s new book, “Uphill Both Ways: Hiking Toward Happiness on the Colorado Trail,” was released March 1 and chronicles the summer of 2016 when Lani and her husband hiked the 486-mile Colorado Trail with their three son.

However, like any powerful piece of non-fiction, the story is much more than a walk along mountain ridges.

“Ultimately, it’s a story about…finding ways to be happy in the life that’s given to you,” she said. “The ‘big reveal’ in the book is that living a quiet life is somehow the secret to happiness.”

Part meditation on the natural history of the Rockies, aging, and the relationships that hold families together, “Uphill Both Ways” is a book set in Colorado but about a universal human experience.

While Lani has lived in Whitefield for nearly two decades, she grew up in suburban Colorado, where she spent most of her time outdoors, taking advantage of the state’s recreational opportunities.

“That’s what you do when you live in Colorado. You go up to the mountains instead of going to the beach,” she said.

The natural wonder of his home country inspired both a love of the written word and the natural world. She initially attended college with the intention of earning a degree in journalism, but soon decided she was more interested in science and environmental protection and found herself transferring to the College of the Atlantic in Bar Harbor for a degree in human ecology.

When she graduated from college in 1996, she and her husband hiked the Colorado Trail for the first time. Although she didn’t know it at the time, there would be another 20 years, a career with the Maine Department of Environmental Protection and three children between her first and second adventure on the famous trail.

The decision to return to the Colorado Trail came at a turning point in Lani’s career. In 2012, she returned to school and earned a master’s degree in creative writing from the University of Southern Maine two years later.

However, when she graduated from the MFA program with a degree in hand, she found herself somewhat dissatisfied with the idea of ​​returning to a “dead end” job without ever attempting to write a novel.

“I didn’t really feel rewarded with life; I guess you could call it a mini midlife crisis so I was like ‘Let’s drop everything for a summer and go to Colorado and walk that trail again, let’s see what’s changed in twenty years, both there down and inside of us,” she said.

She admitted that when she first presented the idea to her family, there was some rebellion. It took two years, between negotiations with her sons and husband and planning, for the trip to finally come true. 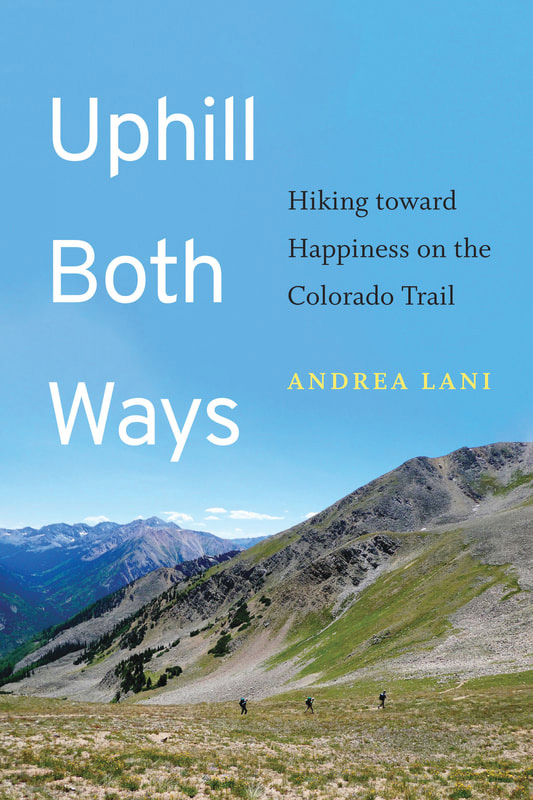 Andrea Lani’s “Uphill Both Ways” recounts her journey with her husband and three sons over the course of a summer in which they hiked the 486-mile Colorado Trail. (Photo courtesy of Andrea Lani)

The trip lasted 6 weeks, almost all of her sons’ summer vacation. Her eldest son was 15 and the other two 11, and although they watched the trip with a somewhat dramatic and desperate attitude immediately afterwards, they now see it as one of their youngster’s most important experiences. lives.

In some ways, “Uphill Both Ways” is a story that fits thematically into Lani’s other writings, which focus heavily on the natural world and motherhood.

When she was in her twenties, living in Gardiner and working for the state, Lani, like many writers, worried that she hadn’t had enough deep experiences to merit writing a book.

“Everything I read was like someone was hitchhiking through Southeast Asia or biking around the world or studying wildlife in Africa,” she said.

However, in having three children, Lani said she found the life-changing experiences she was looking for. She began reading novels and short stories about motherhood, and in these stories she found catharsis, humor, and a way to process what she was going through raising her children.

She started taking classes that focused on motherhood writing, and eventually found herself working as an editor at Literary Mama.

As the savvy editor and writer that she is, Lani knew that some kind of book could come out of her family’s adventure, so she became good at tidying up bits of everyday conversations or pictures and write them down by headlamp once everyone is settled. in their tents.

“I don’t want to give the impression that it was contrived. The book wasn’t the goal, the goal was to be out there together as a family,” she said.

It took two years after the trek for Lani to complete her first draft of the book. When the pandemic hit in March, she started shopping for her book proposal to smaller publishers.

“The process of finding an editor as a writer, as opposed to an agent, is a bit like internet dating,” she said. “You kind of have to find someone who shares your interests, but there also has to be a spark there.”

It was around her tenth submission that she finally found that “spark” in Bison Books, an imprint of the University of Nebraska Press that focuses on books of general interest set in the trans-Mississippi west of the United States.

Not one to rest on her laurels, Lani said she was already on her way to shopping for a collection of her nature and motherhood essays.

“Personally, I’ve been changed by reading other people’s writings on the natural world, so I feel like if I could get anywhere near the level that some of my hero nature writers are at, then maybe “Maybe I could…move the needle a micrometer,” she said.

Sheepscot General Store will host a launch party for Lani’s book from 2-4 p.m., Saturday, March 5, at the Whitefield store. The event will include a meeting, a reading and a signing session with the author.

For more information on “Uphill Both Ways” and Lani’s other writings, visit andrealani.com.

There is an ancient Sardinian proverb — Furat chie venit dae su mare — it means: “He who comes from the sea comes to fly”. Waves of occupation – by the Phoenicians, Carthaginians, Byzantines and Romans – instilled a culture of fierce independence. Over the centuries, those who lived near the coast escaped inland, where […]

The Allegheny National Forest Chapter of the North Country Trail Association will host the annual Allegheny 100 (A-100) Hiking Challenge June 10-12, 2022. The A-100 is not a race, but an individual challenge of endurance, determination and resilience. Hikers can choose to complete 100 miles, 75 miles, 50 miles, or 25 miles in 50 hours. […]

Whiskey Goats: outdoor clothing for hiking, hunting and every day

Whiskey Goats Outdoor Co invites you to shop locally this holiday season and get something special for the outdoor enthusiast on your list. Locally designed and printed, Whiskey Goats gear includes hats, hoodies, tees, sweatshirts, flasks, camp mugs, and more. We work with several local businesses to create our products and are located in two […]